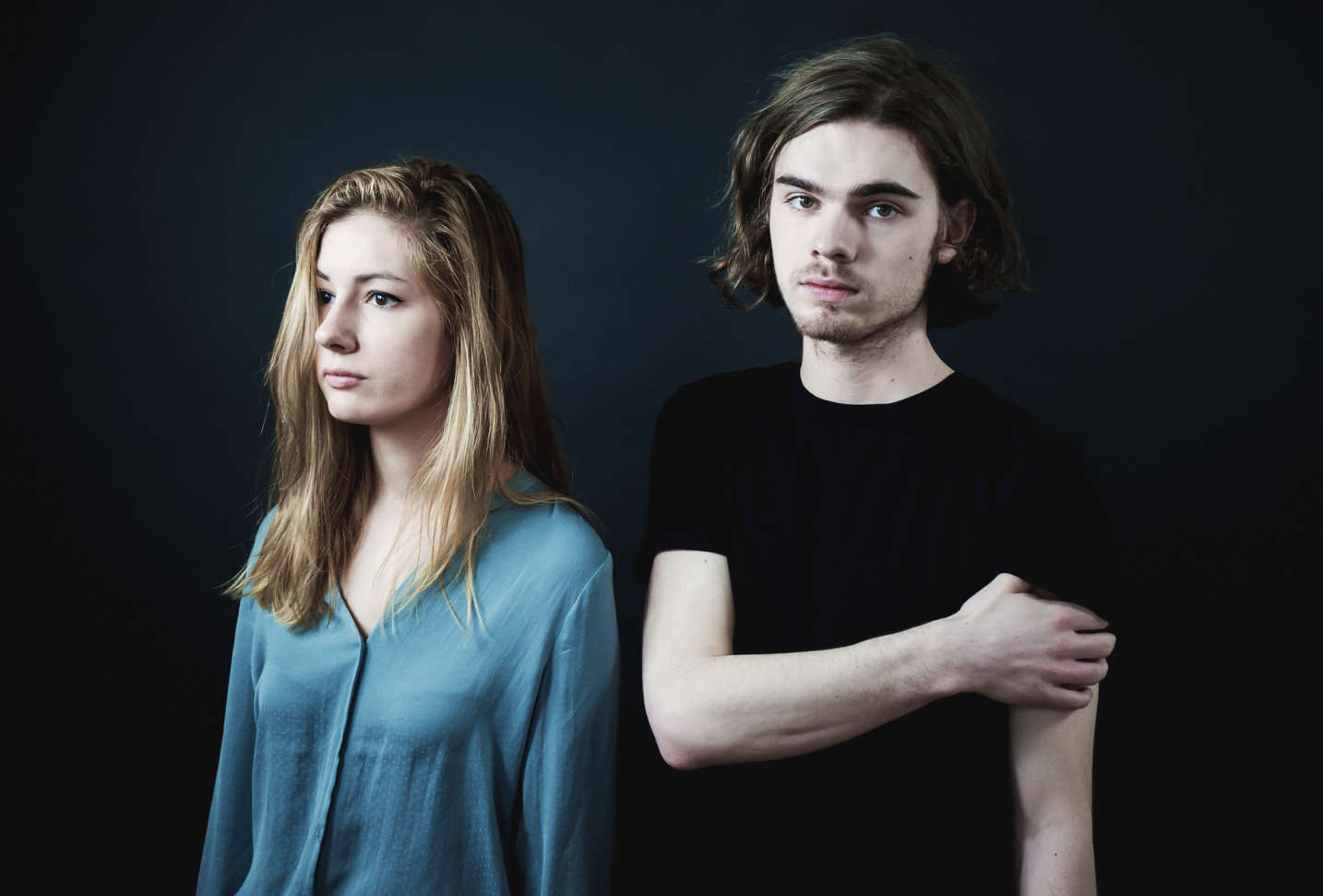 Have you been in Slovakia before Waves Bratislava?

I have been once, but I was 10 so I can’t really remember that. But it is the first time we’ve been playing with the band in Slovakia, so it is quite nice. I’m really looking forward to that.

If I am right you’ve been playing in London few days ago.

Yes it is true. On Saturday, what is today… Friday, yeah, week ago we’ve been playing our first show in London ever and it was really cool. There have been many people and I think they really liked it and I hope we will come back.

In which club was it?

The Old Blue Last, it is in the center of London and it is really funny house. It is like, very small but really high. So I think it was 4-5 floor high, it was really interesting and people were really nice.

You have now tour in Europe?

Yes. We are supporting band called Metric, we have been about 2-3 weeks in Germany, in Amsterdam, and we do some shows in Austria, Germany, Switzerland. It is not a real tour, just a few shows.

Is it an Austrian band?

It is Canadian band, I think some kind of electro-pop. They are not so famous in Europe but they are quite big in Canada (950,000 likes on Facebook).

I know that Leyya is a duo…

Yeah. Marco, unfortunately plays with his solo project Karma Art and now he has a sound check so couldn’t be there.

How did you meet him?

We know each other for about 10 years now, we came from the same town and it is very small town. So if there are people who listen and like the same music you will meet them. We met 10 years ago and from then we always made music together and somehow it later escalated to Leyya. 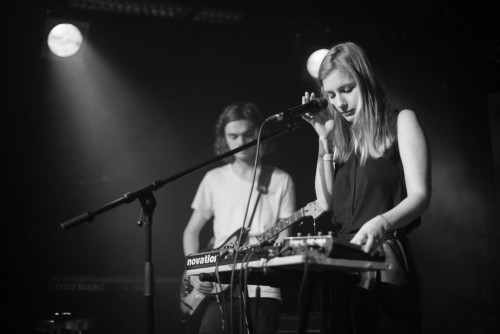 Do you remember how did it start with Leyya project?

I had a single singing project, where was just me and guitar. Marco always supported me with a guitar for a life settings. I had my own name it was Sofie-El and it was not really creative so I thought: “Ok, I have to choose a new name”, then it was Leyya. It was a time when we started doing electronic music. It was a single song guitar project at the beginning. Then we were like let’s do something new and we just kept the name. It has kind of flow.

And yeah, our first Leyya show was in our hometown directly at the city centre. It was open-air and it was really horrible, it was our first show, many people… Than we wrote an album and for a year long we’ve been figuring out which sound we want to have, how we want to sound. When we had our first show, we really didn’t know how to do that. It was just a beginning. Everyone starts somewhere…

Why did you choose the name Leyya?

I don’t know, it is the name that you can really easily remember. I wanted a name that just don’t make a sense, nothing like “wooden chair” or whatever. Something you remember how that sounds, little bit like music, little bit more creative, little bit more special, little bit more mystical and then we kept it, we said: “If we will still like it a week later it is ok.” We kept it. 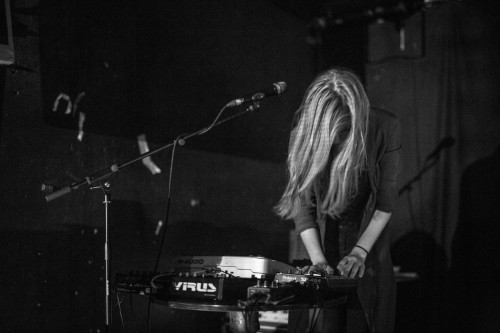 I have a band too and the name is always changing.

Yeah because, the band name, if you still like it in a few weeks then keep it, and if you don’t want to hear it after few shows then just… No! Search for a new one.

You moved from this small town to Vienna. Was it a good decision?

Yeah, it was a good decision. Where I come from there is a music scene really really small, and I think we don’t have audience there. We were thinking if we want to do this music then let’s go to Vienna. Because there are really more people that you can meet, more people that you can work with. We move there 3 years ago and now we work together with lots of people, with labels, with booking agencies, with management thing and so on. It is good to be there because in the small city you don’t have opportunities like that, that’s all.

What about the alternative music scene in Vienna?

It is better, better than upper Austria, better than I came from and I think that people are more open for that. But I think we want to go more international because there are more people, audience in Germany or London, or whatever… But I think Vienna is a good start I guess.

Also it is near to Bratislava.

Yeah, so we drove here just about an hour. It is not so far. It is funny because it is closer than my hometown, so we have to drive hours to go home and one hour to get here. Funny.

On the song “Superego”: “I don’t really want to tell everyone what is my story behind it because everyone should have his own story to the song.”

What is the history around song “Superego”?

It is really funny because I had this question sometimes before. It doesn’t have a history. It was a song that we wrote and it was finished in one day. It was an idea that Marco had this melody “Mhmm” (sings the main motif) like this hamming thing, he said: “We have to do that, just sing something,”. And we did and we were working on it. After a day it was finished. It is not really special but, yeah, I do have a hidden stories to my lyrics. I really want to keep them open so people can make theyre own story about it. I don’t really want to tell everyone what is my story behind it because everyone should have his own story to this song.

Did you expect it will have so international success?

No, but it is good and we are very proud. We knew that it is the strongest song on the album, so we knew it will be a single and it will also be a good video. We did everything we can to show it people. We are proud.

You write all the lyrics?

Yeah. I write the lyrics, because I am a singer and I want to sing something that I can relate to. If someone else writes it then it just wouldn’t fit.

Your new video for “I Want You”. Where is this long street?

It is in Vienna (laughs). It’s funny. It really doesn’t look like Vienna, it was in the evening and we just filmed there about 30 minutes and it was: “Yeah let’s go there and see how the sun will be. Let’s meet at 6 and just do something, run up and down, sing and so on”. It was really funny, because it was no stress there. It was in Vienna in Meidling in the 12th. district. It is a special place because they are now working on it, it is going to be a dormitory. Now it is empty.

What kind of music inspires you?

What inspires me… I do have a few. I like music that is from the heart and tells stories and where I can make my own version of the meaning of the song. Music that makes me be somewhere else. When I hear it than I can swift away. I like music like that. But I like music that is complex, I really like electronic music which does have a sound and no beats, it’s really special, I like that. I like rock bands too, I like Queens Of The Stone Age, they are really good. It is like very simple and really difficult. It just has to talk to me in the way so it is nothing specific. It is just everything that finds a way to me and I listen to.

Do you find an inspiration in movies or books?

„Music is my full time job and the service thing is just to pay my apartment.“

What are you doing in your normal life? Music is enough for you to make money for a living?

Yeah. It would be very very good if it is so. Marco is currently studying music and I am doing a waitress a few hours in a week like in the stories (laughs). I do work in food service 24 hours per a week and the rest of my time I do music. And I concentrate on it and I work on it, maybe we can live of this sometime!

You are in this stage of in-between.

Yeah. I really hope, and I am concentrating on music. Music is my full time job and the service thing is just to pay my apartment.

Can you tell me more about the music scene in Vienna? Are there a lot of bands that you like and admire?