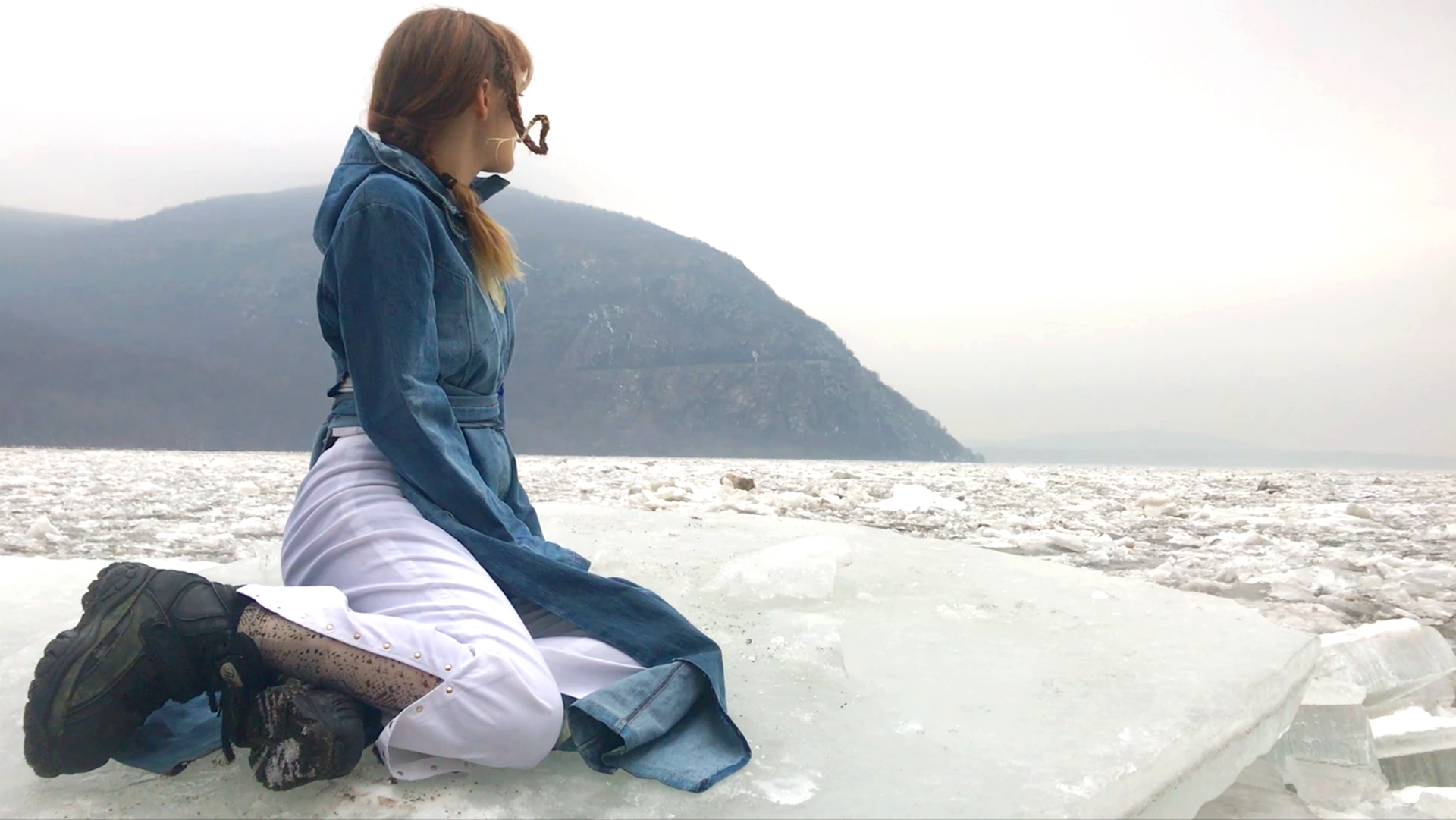 SWINE MOOD: dvdv’s magical world in „What is the opposite of ambivalence“

Multitalented artist dvdv, which works with graphics, visual art, new media art and music is releasing a new wonderful album What is the opposite of ambivalence on September 21st (Bandcamp). We made an interview on this occasion. When Mohamed from Kalibr+ sent me the dvdv’s project, I was amazed by how unique this album was. After few songs, I was immediately drawn to the artist’s magical world, which she created using deeply layered vocals, abstract ambient sounds and innovative beats. You can find out more about Phyllis creative process from our e-mail interview below ☛

SWINE DAILY ➼ How are you today and where are you right now? Could you describe for us your environment?

DVDV ➼ I wanted to disappear today but am finally feeling a little bit better. I am in my roommate’s room in Berlin right now, which I use as a painting space while she is traveling. The room is colorful, currently, half of it is filled with my painting equipment, layers of foil, textile pieces, all kinds of colorful cans, and cardboard. A tram is passing by with vibrating noise and I am sitting on a yellow couch.

(TRAVELING) In the credits of „What is the opposite of ambivalence“ (WITOOA) it’s written, that music material from the album was partially written and field-recorded while being in NYC, Tokyo, Beirut, Kuwait, Augsburg, Berlin, and Malaga. How long were you collecting all these materials and it’s quite a lot of cities across the globe! How did you manage to travel to all these places?

It took me about 5 to 7 years. It indeed is a lot of cities, and I am in a privileged position to be allowed to travel to all these places and even have friends sometimes in so many spots around the earth. Before I moved to Berlin 3 years ago I lived in Augsburg for quite some time. I was mostly staying up all night to create and work on sounds to distract myself from ongoing problems and I worked on my interactive website for all my tracks from sketch. It was my distraction from all the things that I couldn’t handle – it was a little bit of torture but it also eased my mind in a weird way. The track „00023 ghosts“ is about 7 years old and I produced it in my bedroom, like many other tracks. I also recorded sounds from my Akkordeon for it. I had a feeling that something heavy and unbearable will approach me soon and I wanted to create a matching atmosphere. 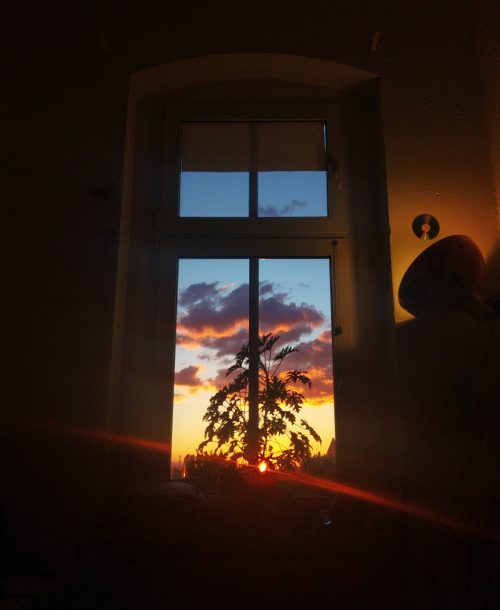 At that time I had a long-distance relationship in NYC, we visited each other whenever it was possible. His friends turned into my friends. Warren Wolfe was one of them for example with whom I also produced and wrote the track „00043 mountain“. The field recording sounds inside of that track were recorded in Beacon, at an iced lake and a cave, where we also filmed the music video together with filmmaker Joey Emmanuel. After the break up I was unrested and in a lot of desperation but forced myself to keep moving. I got invited to Japan to present a collaborative project called „The Future Is Not Unwritten“ together with Susanne Steinmassl and others. I stayed in an Airbnb and wrote and composed „00044 tokyo“ and „00045 forgive“ within a few hours. I remember I was laying on the ground with my Shure Microphone and my Focusrite Interface and Laptop, trying to be as silent as possible. 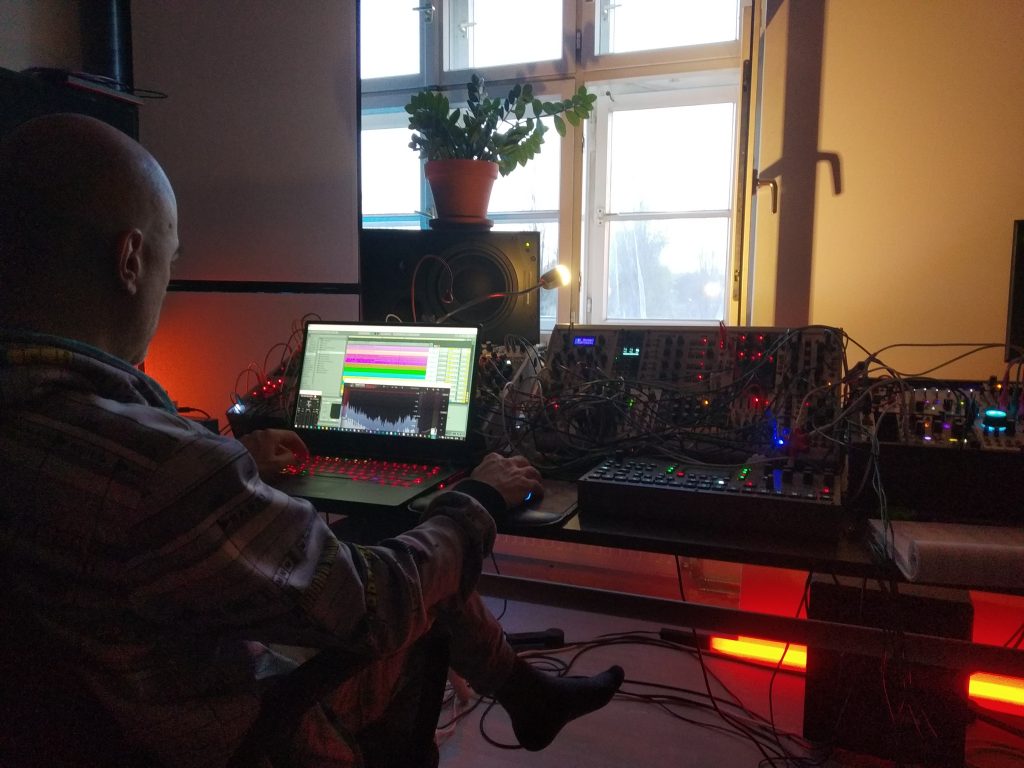 Also for a long while, I am part of the Kalibrplus collective, which is based in Kuwait, and I got invited to play some events there and also perform in Beirut once, organized by NNF Agency. Some recordings of these cities can be found distorted through the album, for example, the helicopter noise in „00023 ghosts“ was recorded while standing on a balcony in Beirut, 2018.

In 2019 I got invited to perform at the Eufonic Festival in Barcelona and afterward visited my old roommate in Malaga, this is where most of the ocean recordings came from. And of course, in Berlin, I finalized all the tracks from all the years and composed the main track „00048 what is the opposite of ambivalence“ and „00052 spending“, with sounds of the swallows flying and dancing outside my window, and of course atmospheres of my favorite forest spot. 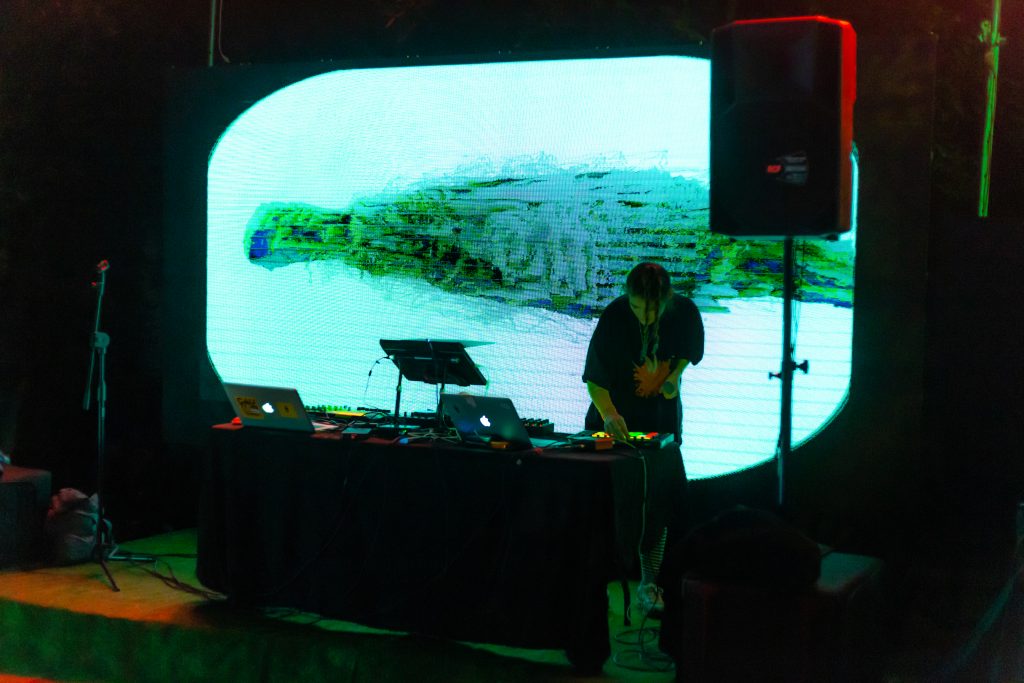 (COLLABORATIONS) You’ve also collaborated with other artists on WITOOA. How these musical partnerships came up, and how do you choose your musical collaborators? Is the live musical session, experimenting, talking, etc more important for you, or do you also email/exchange digitally some ideas when you can’t reach the other person?

I really do not have many borders or terms, when it comes to this. I would say, it just happens in a moment in time, and then it develops and it possibly „syncs“. I remember with Warren Wolfe, we played around with beats before and worked on tracks every time I was in NY, but the last time we met I had noted down a few lyrics on my laptop right before he arrived. I remember, I was really emotional on that day and wanted to let it out somehow but didn’t know in what way. Warren motivated me to start working on a track together. We started to produce, record, and sing together while going back and forth in adding elements. Warren is an amazing composer and singer, and his mesmerizing voice, *sigh* I just don’t know how to describe it. The track „00043 mountain“ developed through this. Later on, Warren asked Jack Bandarenko to record violin melodies to it.

Blckcstls is probably one of the first people I have ever done music with, which started somewhen back in 2013. He was the one inspiring me to start working on atmospheric and expressive sounds myself. A genius, when it comes to ambient music. For „00045 untempest“ I asked him if he would like to add anything to my composition and he transferred production samples to me digitally. Through him, I also got to know the whole Kalibr+ collective and turned friends with them. Now I cannot live without them anymore. It is always fun to collaborate with each of them. I always have full creative freedom, and it is a simple exchange of ideas, with everyone adding something step by step. You should check out Blckcstls latest album Notes From The Dust – it is out of this world.

Currently, I also work a lot with Poly Armour (listen below ↴)a producer and songwriter, while I am focusing more on the singing and songwriting parts. It was as easy as his and my friend Karol recommending his music to me inside a Facebook message.

The music or work just needs to hit me emotionally or create a perceptive and feelable vision inside my bones and if that is the case it is easy and fun for me to collaborate.

(CREATIVE PROCESS) Mohamed Abnaof from Kalibr+ told me you sometimes use unusual recording techniques, could you tell us something more about how you collect your musical ideas and record your music/vocals?

Shoutout to Mohamed – he is the sweetest I swear. Okay, now to your question: Hmmmm, I think for this album I was still using a very simple Shure SM58 Microphone for the most part. For the track „00023 ghosts“ possibly even a very cheap USB microphone, it is the oldest track on the album, and it took me a while to mix the voice properly afterwards.

I once saw a video of Kathy (Yaeji) saying that she uses her field recorder to record vocals, and for me that was game-changing advice. I mean, it is not always easy to record in complete silence, especially with a sensitive field recorder, but the closeness and intimacy of the voice are just incomparably good.

I mostly start composing a melody and then images and ideas fade into my head and words start to build. Therefore my tracks are often one takes, with some corrections now and then. The rhythm, if there is one, and textures often come later on. I see rhythms a little bit different than most people. Our current state of thinking is that time is something pretty fixed and stable, at least on our planet. There are timelines and past, present, future. But I never saw it that way, and I often struggled with being able to simply measure if something happened fast or slow, and these moments stuck with me until today. Therefore I enjoy subtly playing with the listener’s ear and breaking this illusion that time is something stable. Just to consider that gravity, acceleration or speed already change the way time is perceivable. You won’t be able to sync most of my songs to just one bpm scale and that makes my music a pain for remixing or playing it in sets, if people are trying to bpm me, hehe. 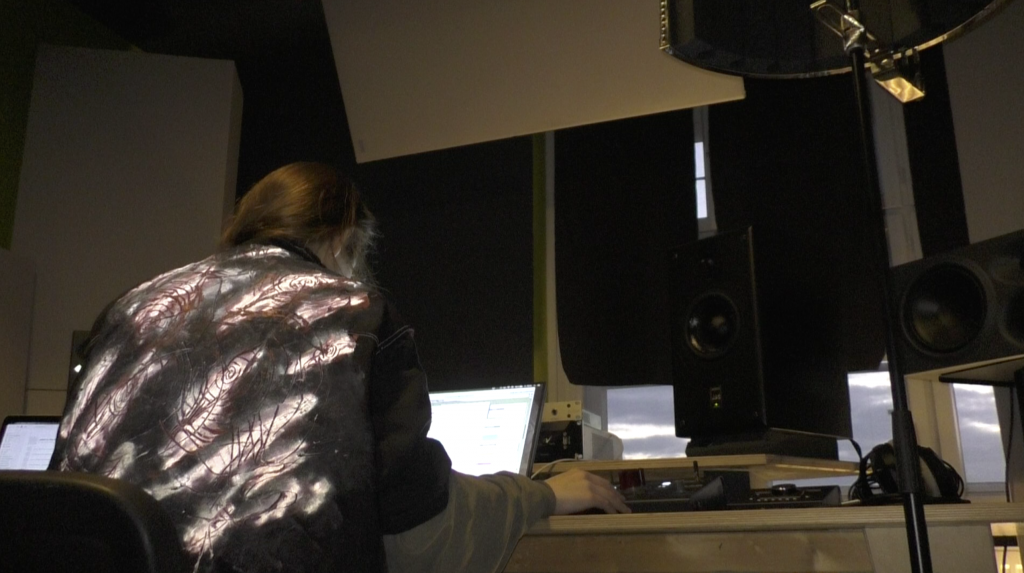 Also, for about 8 to 9 years I am writing notes and dreams, and ideas into sketchbooks. They helped me stay „sane“ and memorize my phases, experiences, and through that also sentences and lyrics, that wanted to stick with me as songs. How I collect my musical ideas is really hard to say and I can possibly just give you the plain and basic answer: Life, lol. To clarify, I just am a vessel from my world to yours – and this is how I feel, how I see and how I care about what is beyond my perception and body.

(BALANCING MUSIC WITH LIFE) How many days from the week you can spend mainly focusing on music? Can you live from music or music-related work, or do you have to balance your art with non-art things?

I was lucky to actually get funded by the Musikfonds in Berlin to finish this album. If I am honest with you, I never thought that would be possible for me. So the last half of the year I was focused on that and finalizing every mixing detail at the studio Rooms of Kairos and then later on with the help of mixing and mastering engineer (Stephane Lefrancois).

Usually, I work as a freelancer for all kinds of jobs like front-end websites, video editing, graphics, 3D works or managing of YouTube channels. My aim for the future is, that my handmade merch will be the way for me to earn my monthly income on a stable level. Music doesn’t have to be, it should stay free from that pressure. Btw I created a lot of handmade merch for this album release :> 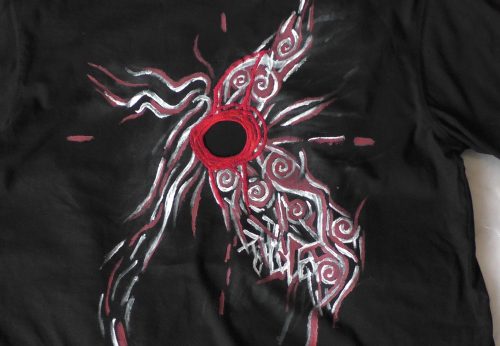 After grammar school, I started to be an autodidact, which means I preferred to teach myself the things I wanted to learn, experimented in all kinds of fields, and learned it by myself. Everything has its positive and negative sides, I learned without presets but also missed out on many important sidenotes of most jobs and tasks. It definitely is a choice and I am lucky that I had a mum who really trusted and believed in me, even though I barely managed to make money in the beginning. I guess because she went through the process herself.

I would say the way I work as a freelancer is to have many „tentacles“ and stay interested in all kinds of various jobs and impossible tasks.

That gives me the possibility to be more flexible, stay experimental but it can also lead to a constant information overload and problems of taking even the most simple decisions. But I stay free from pre-made schedules and job authorities that decide over my time and ideas.

⋱ ⋯ Okay, the e-mail program is starting to bug out by all these images haha. If you need anything more lmk, also you do not need to use all of these images. Thank you so much for your time and talk to you soon!