Kaiydo is a young rapper from Orlando who only turned nineteen at the end of January but whose work puts him far ahead of his peers. His decision to skip college in favor of career in graphic design started him on an unexpected journey of creativity which definitely turned out to have been worth it. 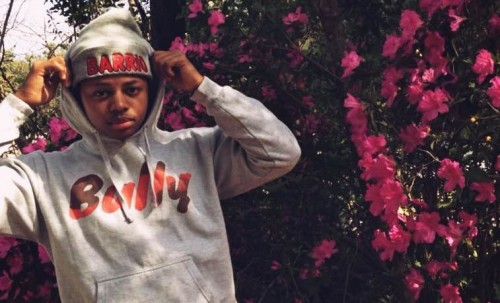 He gradually started to put songs from his ongoing project „Colors & Sounds“ on his SoundCloud account, each of them inspired by a specific color. The first three compositions have currently been played more than 150,000 times and Kaiydo has been noticed by media such as the respected music magazine Pigeons and Planes or MTV Artists. Even on his debut project Kaiydo presents himself as an original and artistically mature personality.

How did you get into rap music? What was the breakthrough moment when you decided to start rapping? Can you remember some of the first hip-hop recordings you were exposed to?

I can’t remember a distinct moment when I decided to get into music, I just remember trying to imitate my older brother and cousins and that’s kinda how it all started. As far as the first records I heard I’d say lot of southern hip-hop, Outkast was a big one, T.i, Rick Ross, and pretty much whatever was on the radio at the time.

I read in one interview, that you skipped college for a career in graphic design which I find interesting. Is graphic design something you want to continue to do or you are planning to concentrate fully on hip-hop?

Yeah, I mean the plan is definitely to stick with music now since everything has picked up. After high school stuff was going well with graphic design so it was a natural transition into doing it full time.

When you dropped “Red Freestyle” did you expect that it would have such a huge impact? It has 156,000 listens on SoundCloud so far. How do you feel about this success and are you motivated enough to make a whole record, album or mixtape? What are your plans?

Honestly no, I dropped that song pretty randomly without any press release or anything, I expected it to get to like 10k at most. I think it’s dope though that people gravitated to my music so early. And I’m definitely working on a full length release. Just trying to make the best possible project I can right now.
[soundcloud url=“https://api.soundcloud.com/tracks/236598536″ params=“auto_play=false&hide_related=false&show_comments=true&show_user=true&show_reposts=false&visual=true“ width=“100%“ height=“450″ iframe=“true“ /]

Are you influenced by Orlando as your environment? Also, what is the current scene there like? Are there a lot of young music artists you admire?

I would say I’m pretty influenced by southern culture as a whole. As far as Orlando I think the scene is dope, it’s more of a small demographic so everyone knows everyone and tries to 1-up each other, lol. It’s cool though, it keeps everyone moving forward.

What are some of the most played tracks on your mobile these days, can you give us some recommendations?

I listen to a lot of artists around my age, like Ishdarr, Smino, Jay Jumpin, Kodak Black etc. Those are usually the most heavily played artists in my rotation; compared to mainstream artists I think the younger generation is carving out a new sound completely.