First of all. When I‘ve discovered Ayler Records through a Peter Brotzmann album, I‘ve scrolled through your Bandcamp page and I was simply astonished. I like every album that I‘ve clicked on. Brilliant, forward-thinking, progressive and extremely creative. A lot of forms of free jazz, improvisation music and in the interesting mixture with many various genres. >>> How do Ayler Records curate its sound and catalog? When you decide, this is the next project you want to do?

Stéphane Berland ► First of all, the most important part of the decision is that I like to release records I myself as a listener would be happy to find in a store. It’s generally a question of what I’m into at the moment and also, following the human stories and collaborations I have with some of the musicians appearing on albums in the catalog. You probably notice that there are very few ‘one-shots’ in the catalog. I like the sense of working together with musicians in the long run.

Are you always searching for new bands, for new artists? How do you find artists?

► Mostly by going to concerts and meeting and talking to musicians. Not many releases did follow unsolicited submissions. I (and Jan Ström before me) always attended many concerts and discovered bands and musicians that way, talked to many of them on such occasions and offered to record them or release a recording they had already.

How are you communicating with artists when preparing a studio album or an EP. You always plan live meetings and talk with artists as much as you can or do you work sometimes completely virtually?

► It really depends on the ‘geography’ factor. When preparing an album with musicians in the USA, it’s very unlikely that we would travel to talk to each other. So it’s basically phone and email. It can be 100% email and file sharing when it comes to the mixing part. Even in Europe, it generally starts with phone calls and emails. But in these cases, I can easily travel to European countries, to go into the studio for example, and I also sometimes do it to attend festivals, so these are opportunities for meetings. When still working with Jan, I would often travel to Sweden to work on forthcoming releases and sometimes record live there.

There really are two ‘phases’ in the cover designing process.

(1) From 2000 to 2008, all covers followed the same graphic guidelines, with the same beige background and a painting (very rarely a photograph) by co-founder Åke Bjurhamn. At that time, I was merely choosing paintings or details in paintings and also ‘layout-ing’ the covers and booklets, following the guidelines.

(2) From 2009 on, I started designing all the covers myself. In fact, I make a living as a graphic designer and writer in advertising (what one calls a ‘day-job’) since I was 18. So it feels natural and is a great pleasure to take care of this aspect. It’s half the fun of releasing a record to me. The process is most often the following ► the music triggers images that can be memories of a photograph or artwork I already know (I have many friends that are visual artists and I just have to ask their permission to use their work to include in my layouts). Sometimes, they’re just ideas for images I know I’ll have to make myself (like photographs or illustrations) or to have made by someone else (when I feel I’m not confident enough to do them myself). I then ‘layout’ around them.

In other cases, I have started from visuals provided or suggested by the musicians themselves and worked from there. There also have been a few ‘four-hands’ collaborations with visual artists that were acquaintances of the musicians (the 4 volumes in the Marc Ducret’s “Tower” series were done that way).

What‘s Ayler Records input in the creative/recording process behind some of the albums? Do you help artists in particular things in the process of creating the album?

That’s the toughest (and most likely) the longest one to answer because there are so many different cases. Sometimes, a recording arrives already finished and mixed, even mastered at times. Then, my only ‘role’ is to approve it, start designing the packaging and work on the release schedule.

Sometimes, my part starts even before the recording, exchanging ideas on where to go with a band’s music and how to present it. If I can physically attend the recording, I can provide them with some input during the session (acting like an ‘artistic director’ if musicians want me to and ask for advice), though I don’t always think I need to and thus, don’t necessarily do so.

◆ The three steps I’m almost always involved in are: ◆

▰ The selection of ‘tracks’ in the recorded music (when for example, especially in ‘improv music’, we have 2 or 3 hours on tape and decide to put out an hour or less of it).
▰ The mixing part, when we exchange feelings and ideas on ways to improve on the various versions of the mix.
▰ The sequencing part (defining in which order the tracks should appear on the disc) that is to me a very important one for a record to be ‘perfect’. And I’m lucky it’s the one I enjoy doing the most. That of course is not valid for lengthier composed pieces (there are 5 of them in the catalog) for which the order cannot be changed because it was the composer’s decision when writing. 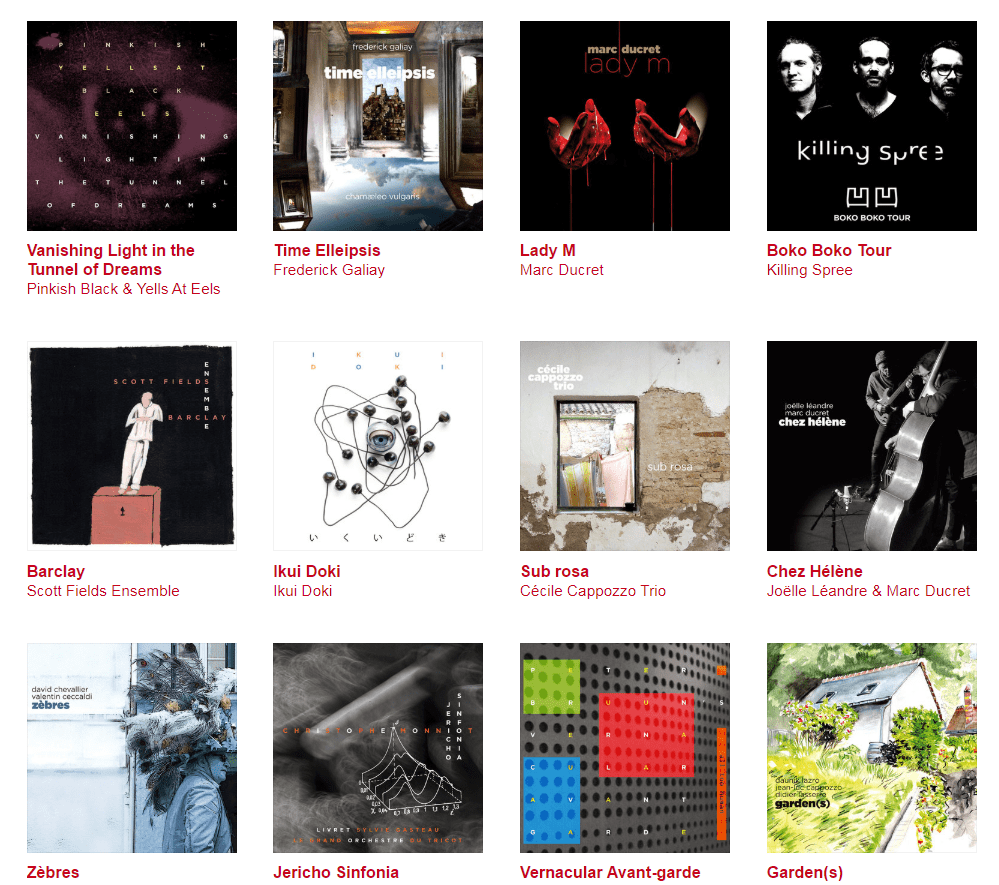 (some of the Ayler Records album artworks) / Bandcamp

What do you enjoy the most in the process of releasing music in Ayler Records?

► What I enjoy the most is that I believe it gives some meaning to my life and also it’s my way of giving back something to artists that have provided me with so much pleasure all my existence, having this craving passion for music since age 5.

What are some of your dreams and plans with Ayler Records? Have you got for example some dream projects you want to realize in Ayler?

► So many of them… 🙂 But the one I almost realized once but didn’t in the end (I actually have the ‘tapes in my drawer’/’files on my mard drive’ but the project was stopped for uninteresting reasons) is making a record with the music by Japanese composer Joe Hisaishi (mostly known for his collaborations with Hayao Miyazaki and Takeshi Kitano) played by jazz and/or improv’ musicians.

I like your „Resources“ list on your webpage, where you recommend some jazz publications and online magazines. Personally, do you have some interesting podcasts, video series, books that you can recommend us about releasing music or jazz or music in general?

► Not that I can think of specifically. I mostly follow as many people as possible on Twitter and Facebook lately. Also, the newsletters from Bandcamp are of real interest. And the All About Jazz (USA) and CitizenJazz (France) websites are very good sources for information.