Mistakes can lead to new unexpected paths – an Interview with Punctum

Punctum is the name of the music duo formed by Catarina Barbieri and Carlo Maria. They recorded a live material in the famous Elektronmusikstudion in Stockholm, Sweden during the February of 2016.

Their bold and brilliant project Remote Sensing takes an alien phenomenology approach to the naked sound of Roland TB303 and TR606, by stripping compositional tactics down to brutal minimalism. Expanded through multilayered delay lines and resonant chorus effects, the widely-recognizable Roland sound signature turns into a hybrid where the culturally established source bonding is dramatically blurred. Read our interview with the duo and catch them playing live in Bratislava during the NEXT Festival.

Punctum will play a concert this Thursday 25.11. at A4 cultural centre / Next Festival Bratislava.

● The album was created in Stockholm, Sweden. How did you both meet, why in Sweden (what occasion)?

We arranged a residency at the EMS (Elektronmusikstudion) in Stockholm, specifically to record something together. The EMS is an electronic music studio, it has existed since 1964 and it’s quite a special place. It offers a residency program, unique facilities and professional equipment for electronic music production and it’s publicly funded. We thought it was the right place to experiment and record something together within a limited amount of time.

● I guess this album wasn’t just a quick improvisation, put together on the spot – can you tell us, how it all started? How you created the concept, choose the right music hardware – walk us through the process.

To be honest the album was produced quite quickly, but the recording sessions were long and intense. The EMS was open all day and we often ended up making late night sessions. “Remote Sensing” is mostly focused on the exploration of the Roland TB303 and TR606, further expanded and enriched by digital signal processing algorithms, the Buchla synthesizer available at the EMS and Caterina’s own modular synthesizer in a very limited configuration. Before sitting down to compose the album, we had fun with our setup, explored it and tried to merge our different approaches to the composition of electronic music. We ended up using this specific hardware because that’s all we had at the time.

Carlo got the Rolands a few years earlier, as a gift from a friend who in turn got the two synthesizers for free from an English man living in northern Italy. Keith, this was his name, bought the TB and TR back in the days in England and he never really used them. He wanted to give them away to some electronic musicians and was happy enough (and frankly quite surprised) to see someone having fun while using them.

Of course, we were aware of the legendary status and reputation of the two “silver boxes” and we could see a lot of creative potential in using them. Their sound, the programming routine, the way you can improvise with them are all unique features that make the Roland TB303 and TR606 incredible instruments. It’s very easy to make mistakes while programming a pattern on the TB303.

Those mistakes often turn out to be interesting and the composition takes new unexpected paths. You end up going back and forth from your original abstract idea and the result of translating it to the sequencer.

It took a lot of time (hours and hours) to program each pattern, a meticulously conducted operation that created the basis of the composition. After programming a pattern, we would start experimenting with recursive delay line-based processing and creating tension and release by manipulating the timbre of the TB303 in real-time. All pieces were recorded live, we made different takes and selected the one we preferred. 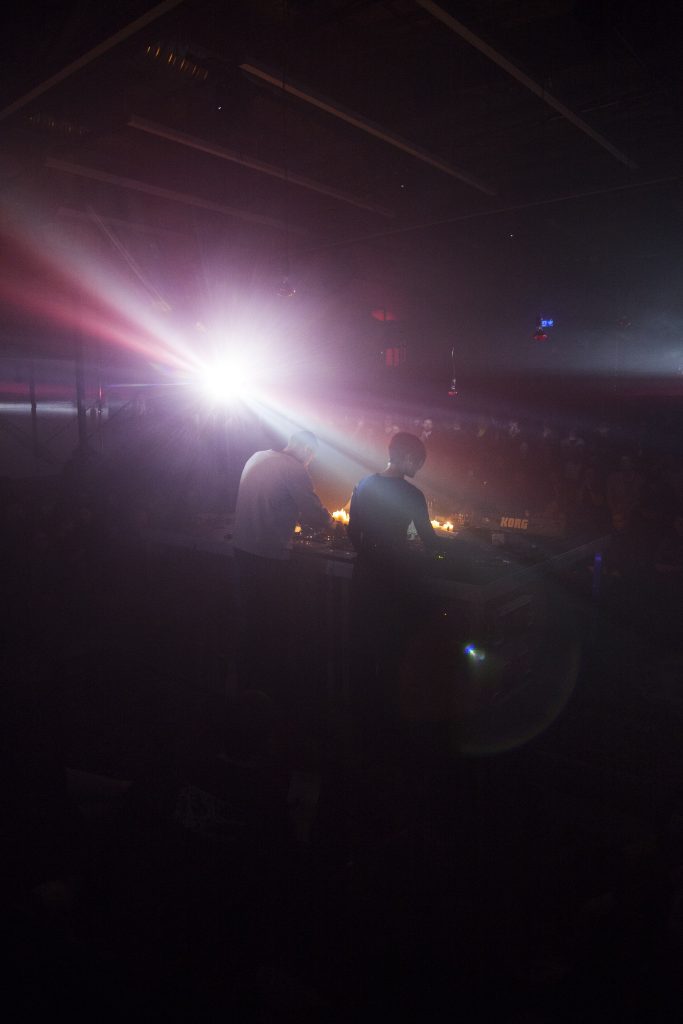 ● The album has a really deep introspective/hypnotic mood. Can you describe your mood and life situations during creating/recording time of this album? What was going on through your life emotionally, mentally?

We were focused and completely devoted to the music we were making and recording together. Perhaps the Swedish winter and the studio isolation helped getting into this introspective and hypnotic mood without any distraction. We were both going through a very dynamic moment in our lives, full of changes, novelty and joy! Some of this energy definitely went into the recordings.

● In the Bandcamp description of the album is written: „By means of reduction and subtraction, the iconic sound of the silver boxes is virtually projected into an ideal desert.“ It’s really a highly imaginative piece of music, I like the idea of an ideal timeless desert/space. I wonder if you were inspired by some piece of literature, film, or visual art while preparing this album?

The idea of the desert was inspired by a text “The Sound of One Line Scanning” (1986) by Bill Viola. Viola talks about the “desert solitude” as “an early form of visionary technology”; he draws this conclusion by referencing the relationship of Native Americans and Aborigines with vast spaces such as the open plains or the Australian desert outback. By talking about this “visionary technology” and “seeing at a distance”, Viola adds that “individuals have used it to hear the voices of the past and future, to become prophets, to receive images, or for hosting the visions quests of the native North Americans, it seems that when all the clutter and noise of everyday life is reduced to such brutal minimalism, the usual control valves are released and images well up from within”.

Besides this text by Viola, we have also been reading the book “Point and Line to Plane” (1926) by Wassily Kandinsky. Kandinsky’s book offers a synesthetic approach to a theory of graphic composition and references musical concepts such as melody and rhythm to talk about graphical objects. Both texts inspired us.

● What music do you listen to these days, what albums or songs or artists struck your attention these days?

This is not an easy question to answer, since we are two different people and each of us have their own preferences! We have recently listened together to “Element 1989-1990” by Carl Craig under his aliases Psyche/BFC. It is a beautiful and seminal record, it’s like a matrix for many sounds and styles that would later come. Favorite track: Neurotic Behaviour.